The Cloudster was designed by Scott Land of Pop’s Prop’s back in 1994. He wanted to design and build a plane to compete with the then popular Team Airbike, which had similar looks, but was constructed using a welded steel tube fuselage. Though light and strong, this was expensive and difficult for some builders, and so Scott believed that a wood alternative was needed. Scott decided he would start his own business and design the Cloudster as his first model. Over the next few years he later designed the Zing and the Pinocchio. The original Cloudster had a 34′ long wing and stalled at an extremely low 22 mph (power off) and 20 mph (power on). It had a cruise speed of 50 mph and a top speed of 65 mph. It was white with red stripes and was originally fitted with a basic (modified) 1/2 VW engine. This was the same time that Scott also came up with the original 1/2 VW plans that have since been updated immensely. The engine had small displacement with  an 88 mm cylinder bore and 69 mm stroke, and it only produced 28 hp. However, the airplane met the main goal of Scott Land, which was to have a low horse power airplane with good fuel economy. Unfortunately, he felt that the airplane was slightly under-powered dragging that 34′ long wing. Scott updated the engine to allow for slightly larger 92 mm piston/cylinder combo but with the same crank (69 mm stroke). This increased the engine to 32 hp.  Scott reported that the updated 1/2 VW  flew great even with the 34′ long wing. 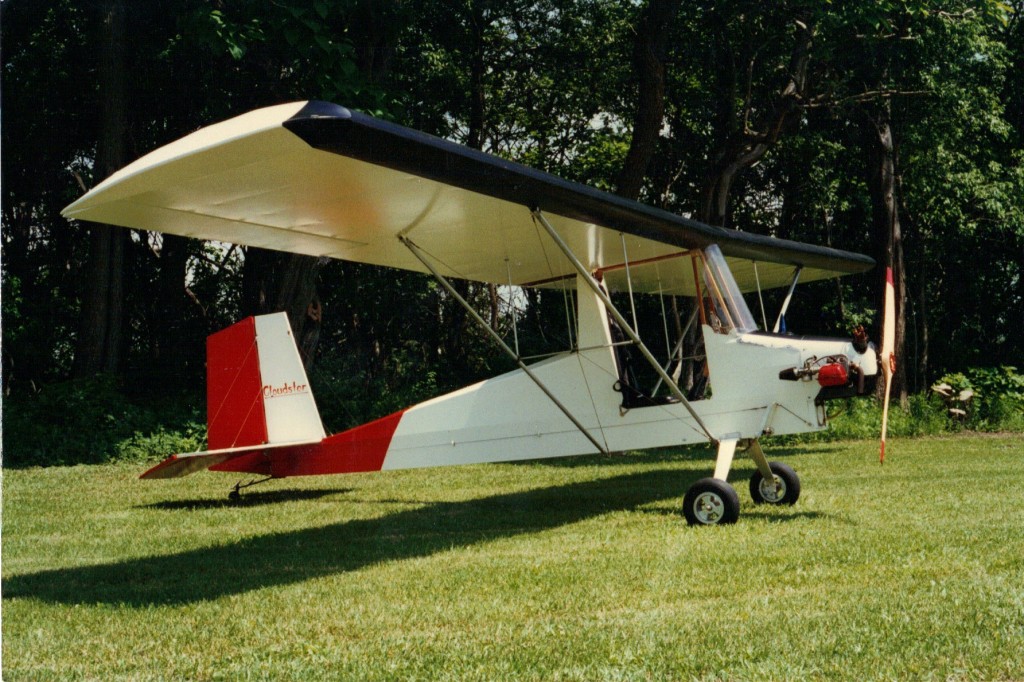 Ultimately however, the designer found that the Cloudster had a bit too much adverse yaw. He was also concerned that since there was no way to restrict people from putting an over-sized engine on the airplane, it seemed too likely that someone would try and thereby over-speed the airplane and possibly reach the VnE limits. Thus he decided it was best to shorten the wing to 31′ and have the plans updated to reflect this change. The prototype was stripped of the original fabric to have wings shortened, and the turtle deck was removed. He then recovered the entire airplane and painted it yellow with a blue stripe. It was at this time that he also started making custom reduction drives for the Kawasaki 340 and 440 models and found the Cloudster to be a great test bed. Thus he removed the 1/2 VW engine and replaced it with a more powerful 2-stroke engine.

The revised prototype was mounted with a Kawasaki 340LC and the performance was outstanding! The revised prototype was a true ultralight, proven weight at Oshkosh in 1999 was a mere 245 lbs. It would get off the ground in about 75 feet, lifting off at about 27 mph and cruise at 55 mph. The shortened wing also corrected the adverse yaw and resulted in a stall speed of only 25 mph! 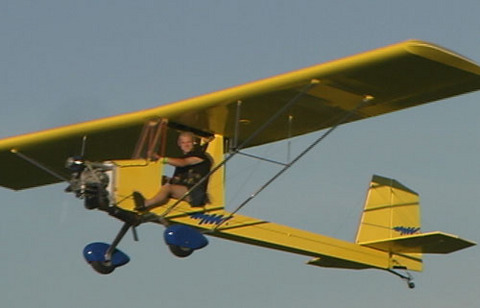 Eventually after the turn of the millennium, Scott lost interest in selling plans and kits and decided he wanted to go a different route with his business interests. He no longer actively marked plans or kits for the Zing and Cloudster and his once booming airplane business sorta sat in limbo for about 8 – 10 years with Scott only selling a few sets of plans if someone specifically sought him out. Luckily in 2010 he was approached by Jeff Erekson who proposed purchasing the rights and assets associated with the design and marketing them once again under a new airplane company. An agreement was reached in February 2011,  and Simplex Aeroplanes, LLC was born. The design rights were successfully transferred along with a few jigs for landing gear and nose bowl fabrication. The name of the airplane was only slightly changed from the Pops Props Cloudster to the Simplex Cloudster.